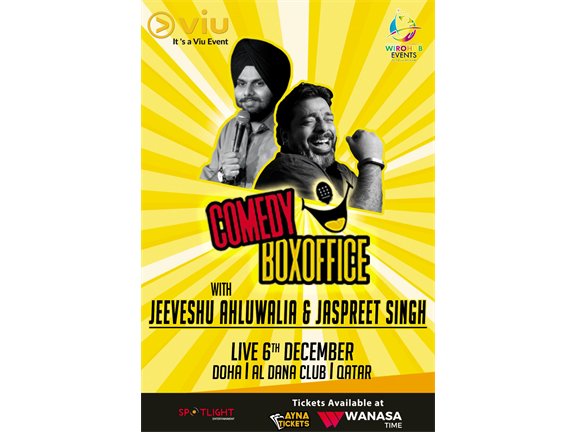 We put love into events

For the first time ever in Doha, 2 famous standup comedians are coming to make you laugh! VIU presents "Comedy Box Office" on December 6 at the Al Dana Club. Get ready to roar with laughter with India’s finest stand-up comedians Jeeveshu Ahluwalia & Jaspreet Singh who are known for their spontaneous one-liners and caricatured set-ups. Do not miss it!

It’s gonna be a stress buster.

Jeeveshu has made his Bollywood debut with "Tamasha" starring Ranbir Kapoor and Deepika Padukone directed by Imitaz Ali and followed up with his stellar performance in "Happy Phir Bhag Jayegi".

Jaspreet Singh is an Indian standup comedian known for his fresh and universal content his Stand-up solo "Tu Toh Chup Hi Reh" has  managed to sell around 10,000 tickets and has spread happiness across the globe. He was Interviewed at BBC Asia Network London and ABC News Australia. Featured on NDTV rising stars of Comedy among others.